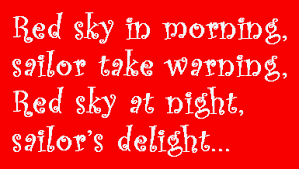 Red is the color of blood and strawberries. It is next to orange at the end of the visible spectrum of light, and is commonly associated with danger, sacrifice, passion, love, anger,socialism and communism, and in China and many other cultures, with happiness.

Depending on where you are in the world, red can represent anything from anger and sin to fortune and fertility. In some countries, like China and India, red is worn at weddings. In central Africa, red symbolizes health and life, whereas in South Africa it’s the color of death and mourning. Red can represent power and status, a good example being the red carpet. Roses and hearts associate red with love and passion, whereas traffic signs and stop signs associate it with danger and warning. And red is also a patriotic color for many countries, such as Britain and the USA, symbolizing blood, sacrifice and courage.

RED in Nature vs. Man-made RED

Christian belief – The color red symbolizes Christ’s blood which was shed during his crucifixion.  Historical fact–  In the 14th century, Christmas trees were decorated with red apples.  Red continued into the 20th century as one of the most common colors of Christmas.

One of the most important roles of color in visual merchandising is attracting attention to a business or product. Bright colors such as red and orange tend to stand out and draw the eye cause intense emotions and evoke feelings of excitement.

Out of all the colorful and politically charged campaign slogans that I heard during my coverage of the Venezuelan elections, the one that grabbed me the most was “Roja, rojita,” or “red, reddish.” Women in the poor neighborhood of San Agustin would repeat it, laughing. They would show me their pinkie, stained with indelible ink after voting. They would point to their red caps or blouses and say, “Roja, rojita.”

What I didn’t get is if they were simply repeating catchwords coined by the Chavez campaign, or if, in effect, they were declaring themselves communists by conviction.

After the hammer and sickle, perhaps the most identifiable symbol of communism around the world is the color red. I would swear that Chavez owns at least 20 red shirts. Maybe up to 30 red berets. The presidential car is a red Volkswagen Beetle.

The color red in Venezuela

The pianist Gabriela Montero has published a statement with her new recording of South American music, delicately explaining her opposition to the Hugo Chávez regime in terms of colour coding. A passionate and courageous performer, Montero regrets her country’s decline under its showboating Castroist president. Here’s her sleeve-note in full:

I make records because I want to share my own and others’ creativity, emotional world and personal souvenirs through sound. I believe everything we do and say is a testament to who we are. A fingerprint. A statement. Usually, the very recognisable EMI logo is red and white. You’ll notice that in this record, the EMI logo is black and white. I’ve chosen to exclude any red in SOLATINO, except for the letter ‘O’, because in Venezuela, the colour red has been stripped of its passionate beauty and power, and is now associated with repression, fury and control. You’ll also notice that the title is coloured by Yellow, Blue and Red. These are the colours of the Venezuelan flag. Red is the last colour on my flag and, coincidentally, ‘O’ is my blood type. I find the symbolism in this quite beautiful. We all share that same source of life: blood. It is the red blood cells that carry oxygen through our bodies. Without them, we perish. With the right balance, we thrive. I’d like this ‘O’ to be coloured by a peaceful shade of red. The red that belongs to all of us. The red that is beautiful in its intensity, and not hurtful in its grip. The red that belongs in this world and not the type that separates and extinguishes us. There is no space for the wrong kind of red, and I choose to remove it from this record. It is my statement.

Where’s My Backpack travel theme for the week is RED. If you would like to join in this week’s travel theme, create your own post titled Travel Theme: Red and put a link to this page in your post so others can find it. Check back in next Friday for a new weekly travel theme.

I was recommended to participate in a contest called “Capture the Color”, sponsored by TravelSupermarket – click (here) to see rules for the competition.

All you have to do is publish a post with photos that capture the following 5 colors – Blue, Green, Yellow, White and Red. You then nominate five other bloggers that you admire or enjoy to enter a post following the same criteria of the contest. Lastly, you enter your post at “Capture the Color” and there actually is a prize for the winner in each color category. I don’t often enter contests of any sort as I enjoy looking at other’s amazing photos rather than participating.  I also don’t play the lottery.  However, I found the challenge fun in that I was able to go back over my own photos and find some of my favorites that might “capture” the colors listed.

END_OF_DOCUMENT_TOKEN_TO_BE_REPLACED

Just a little girl in a big world. I've been saying this about myself since I joined the Navy back in 1984. Someone once asked me if I stole this quote from Marilyn Monroe. I was naive enough at the time to think that I could have come up with anything that original and said "No, I made it up." “I am good, but not an angel. I do sin, but I am not the devil. I am just a small girl in a big world trying to find someone to love.” ― Marilyn Monroe I am once again in the middle of starting a new career path. I am loving life and just want to share a few of my travel adventures with some of the people I love the most.

Where in the World

A Journey to Inner Peace

K.L. Noone Writes
Past Tense For Graffiti

My mind to your mind

The Home Of T-Bird From The Dork Web.

Reimagining Midlife. Change Your Life to an Authentic Life Over 50

The daily life of an addict in recovery

The Rants & Rambles of A Grumpy Old Dude

a writer's journey as a reader